Hi there, here comes another community update on Kenshi. In this update, we’ll go over the decisions and changes that were made on the Discord server, Kenshi’s milestone, and introduction to Lo-Fi’s team members, followed by some visual sneak peeks on what to expect for Kenshi 2.

The Future of Discord Server

As some of you may have known, Caliburn (Sam) who has been keeping the community up to date and was leading Lo-Fi’s marketing has moved on which resulted in some internal reshuffles that we hope have gone unnoticed.

The most significant decision that was made in the past weeks was the ownership of Kenshi’s Community Discord server that has now gone back to the community led by Seth Knight who was voted to the admin role by the group of moderators. For those who have not been aware, there has been an ongoing discussion on Community Server’s ownership and its purpose, but they are now set at rest, and the server is back in good hands.

Kenshi’s Community Discord server has always been a place to share ideas, creation, and experiences of all things Kenshi by the community, however, it was not designed as a means to communicate with the developer. Now with the growing Lo-Fi team who are involved in different aspects of the game development, we have decided to set up a new official Discord server for the team to interact and receive feedback from the community. We will work closely with Seth and other moderators to ensure that the community’s requests are reflected, and there will be more opportunity for us to work together on things such as online events. We will announce the launch of the official Discord server once it is ready.

After 12+ years of development and less than 2 years of the official release, Kenshi has hit a milestone of 1 million global sales. We wouldn’t have made it this far without the support of the community who’s been there from the very early stage and have continued to come back to Kenshi throughout the years. Proceeds gained from Kenshi are now invested in developing Kenshi 2, with the expanded team of 15 and a new office in Bristol.

Keeping everyone safe is our priority with COVID, so we are taking time setting up the office with only those who are comfortable to come in for work. Considering where things are heading in the UK, it will be a while when we can fully kit the office and show some pictures in the blog, but we are fully intending to do so in the future!

In the last update, we’ve introduced several new team members who have joined the studio for the development of Kenshi 2. We’ll continue the introduction of 3 members this month on who they are and what they are up to outside of work.

I’m Christopher, a concept designer and illustrator from Germany. I have been working on Kenshi 2 for the last 5 months and recently moved to Bristol to work at the Lo-Fi Games office. I’m involved in the creation of various visual elements of the project and strive to make the world of Kenshi more immersive with every design I create. The main focus of the last few months has been the design of various props; refining and improving the visual language set forth by Kenshi 1.

Life Balance:
Outside of work I spend a lot of time on things that keep one inspired, like traveling, reading, movies, or playing games (thou there isn’t any traveling going on right now).
But the majority of my free time is spent on improving my skills as an artist, and working on personal paintings. 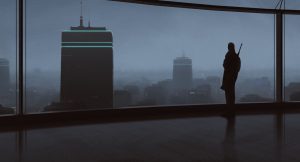 (Image of my personal painting)

Above is a digital painting I did some time ago, I still have a long way to go before I can be content with this and other paintings, but if you’re interested you can see more of them on my Instagram or Twitter. I only recently set up social media profiles, but I will post more of my creations in the future.

I’m Paul, and I’m a Scotsman who has been adrift in South Africa for twenty-something years (and I’m still not used to the heat or humidity). I recently joined the team to work as a writer on Kenshi 2 and am having an absolute blast.

Over the years I’ve worked in television, novels, computer games, and comics. My most recent series, Poison City, and the sequel Clockwork City, about a supernatural police force based in Durban, South Africa, has been optioned for television by Jerry Bruckheimer Productions and CBS. Whether it goes into production or not is another matter entirely.

I was one of the contract writers on Star Wars: The Old Republic back in the day. On the comics front, my most recent work was Star Wars Adventures, for IDW. I also planned out a comic book mini-series for IDW called, X-Files: Conspiracy. The mini-series brought together Mulder & Scully, The Crow, Ghostbusters, the Teenage Mutant Ninja Turtles, and the Transformers. I wrote 3 of the 6 issues of that series. I also adapted the characters I created for the Wizards of the Coast D&D setting Eberron (the fantasy detectives Abraxis Wren and Torin) for comics, also for IDW.

Home setup:
My home setup is a mishmash of books, a cluttered desk, a whiteboard, and walls entirely covered in movie posters and old calendar pictures from over the years. (Lord of the Rings, Discworld, GoT, etc). I cannot stand bare walls and need to be surrounded by the clutter I have collected. I have a desktop PC for gaming, and the novel and scriptwriting work gets done of the MacBook. 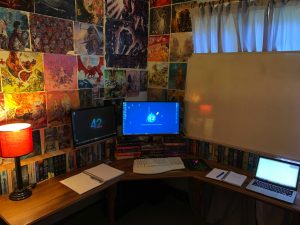 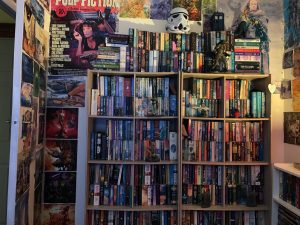 Life Balance:
It’s difficult finding a balance when you work from home. Nothing has changed during lockdown on that front, as I’ve worked from home my whole professional career. What *is* difficult is working from home while having a five-month baby demanding so much attention. I find that I get more work done at night. (I’ve always been a night owl.) So I do a few hours during the day in-between feedings and putting the little terror to sleep, but from 6pm onwards, when he’s down for the night, that’s when my writing day really starts. I usually go on till about 1 or 2 in the morning, with probably one brief feeding for the baby. I need to get back into gym again, as they only recently opened up again, but finding the time to do that is going to be a challenge.

I’m Meg or Gumstar, and I’ve been working behind the scene for Kenshi on Japan for a few years. With the departure of Caliburn, I’ve stepped in to help out the team on PR & Community Management.

Life Balance:
I live in London near several parks, and I walk or run every morning to breathe fresh air and declutter my mind. I’ve always been a city-dweller, but somehow this lockdown has made me crave for nature like never before.
I’ve been observing a family of swans since early spring when the parent swans started to incubate. With ‘The Ugly Duckling’ being one of my favourite childhood tales, it’s been fascinating to see the development of cygnets, when they looked nothing like swans in spring to now when they are perfectly shaped grey swans. They’ll soon shed their feathers and will become indistinguishable from their parents. As elegant as they are, I can’t help but notice how they look like the distant cousins of certain Kenshi creatures when they thrust their heads into the water 🙂 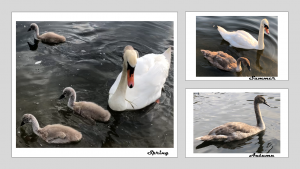 Kenshi 2 goes back 1,000 years from Kenshi 1, and it was undoubtedly a different world from what we are familiar with in Kenshi 1. Some inhabitants would have changed over the years accompanied by transformation in social and cultural dynamics, something that is inevitable given the timespan.

In the past updates, we’ve shown some concept art from Calum Alexander Watt representing some initial thoughts on the world of Kenshi 2. Now that we are further along in the world-building stage, Christopher, our Concept Artist and Illustrator has been busy working out the details on props that are used by Kenshi 2’s inhabitants in their daily life, as in the external light fixtures below. 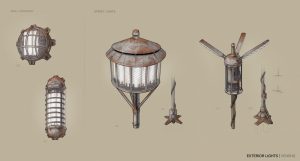 Kenshi 2 is developed with Unreal Engine, which allows further details in visual appearances and animation that would not have been possible in the technical setup used by Kenshi 1. We are happy to reveal an example of a creature that lived over 1,000 years with their uncanny survival instincts.

We’ve been late with this month’s update, but we love to hear your thoughts, especially on our visual reveals on Kenshi 2. As ever, you can join us on Twitter and Facebook, and if you’d rather receive this blogpost in a non-Steam way, they are available on our website and via our mailing list.