So, it’s been a while since our last dev blog, mainly because we’ve been working on bug fixes (hence the more frequent updates), and not-so-bloggable bits and pieces. But bug squashing aside we now have a few upcoming features to share. So, what are our plans coming up to release this year? Since Kenshi’s optimization and engine upgrades are in game and all finished, we’re now down to the last few to-do’s on our list: Localisation, Diplomacy and, of course, the last half of the map with all it’s shiny new content – no major new factions but plenty of new towns and dangerous lands to explore.

The desert is returning to us, people. Those who mourn the old map should be pleased to hear that a rather large chunk of the new area will be more ‘traditional’ in desert style. i.e. less rocky, more sandy. See: 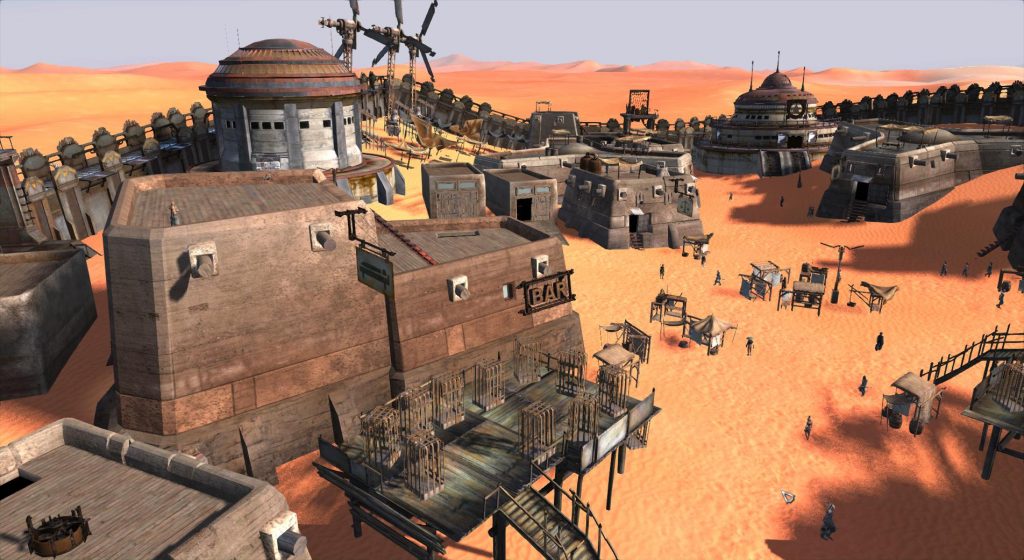 And the rest of the map? Well, that’s for you to explore yourself, don’t get greedy now.

This is the last big important feature coming to Kenshi. It’s a little tricky to plan given that Kenshi lies somewhere between RTS and RPG in play style, so we’re going to need to work differently to most games. Typically in RTS games, you start off with some sort of world presence, putting you in a believable position for bartering with neighbours. This is the missing piece that we need in order to keep diplomacy interesting while also keeping some sort of realism to the world of Kenshi – why would a dominant world power, for instance, be interested in an alliance with some nameless chump armed with nothing but a rag loincloth and a rusty sword? Well, There are a few ways.

First off, we have player town level, a way for your character to build (literally) a presence in the world so that they might actually peak a diplomat’s interest, earn their place as a reputable power in the world. Secondly, we have wealth: depending on each faction (i.e. the greedier nations) this may include town taxation or simply buying your way into their black, dead corrupted hearts. Potentially, this may also include base visits where you can offer tribute or hand over prisoners. And, last but not least, our next main route to an alliance (if you’re feeling particularly badass) is through kidnapping/murdering their most powerful enemies… Take any of these paths to impress a faction, and they should willingly make a formal pact with you – so long as you’re not sleeping with the enemy.

But! What in Narko’s hell happens to the Okranites, for example, if you take down the Holy Phoenix himself (blessed be his name)? This is where another complex web of reactions come into play. The paladins might retaliate and send a particularly angry assault to your base, whilst your United Cities allies might simultaneously send an army to defend you from that very attack – you’re a valuable and respected ally in their plans after all. And then what? What becomes of the holy plains? Do the downtrodden women of the nation start a violent man-hunt? Do the lands erupt into a colossal Narko-worshipping skeleton orgy?  Or do the Okranites simply pick themselves up, brush themselves off, replace the Phoenix with his reborn child successor and continue burning she-devils and foreign heretics? That, my friends, you’ll have to find out for yourselves.

All of this, we plan to have ready in the FULL release of Kenshi, third quarter of this year.