Hi folks, we’re here, it’s the next community update! It’s nearly June and the weather is absolutely horrific here in England where much of the Lo-Fi team are based (okay, so it’s actually getting a lot better on the day of publishing this, thank Okran).

Since our last update we’ve still largely been locked down but we’ve just recently been able to get back into non-essential shops and (thankfully) back inside pubs again. Hurrah! 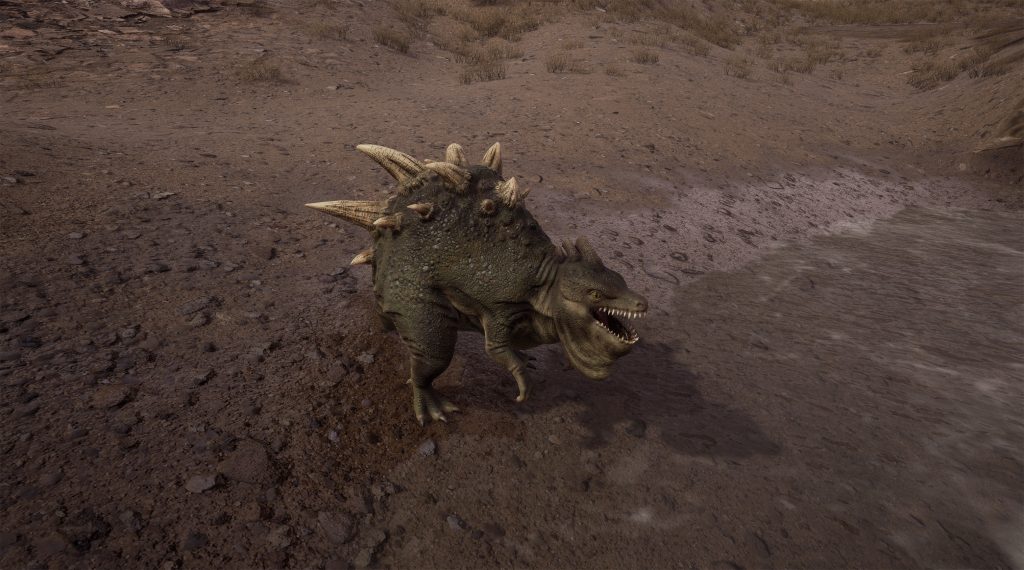 Here’s an old friend rethought and remodelled for Kenshi 2: the River Raptor. On the process of getting to this point, Lo-Fi Games 3D Character Artist Vitali Ivanov said:

“I started from the Kenshi 1 low poly model, then I made a sculpt in Zbrush with what I consider to be more believable anatomy, while still staying close to the original.

Our Concept Artist Christopher Schlesag helped with the overpaint, and with feedback from head honcho Chris Hunt and our Lead 3D Artist Mohamad, we got to the point it’s looking at now. We used a whole range of references to influence its direction, but the ones we’ve highlighted here show the more pronounced features that I tried to implement in the new model. 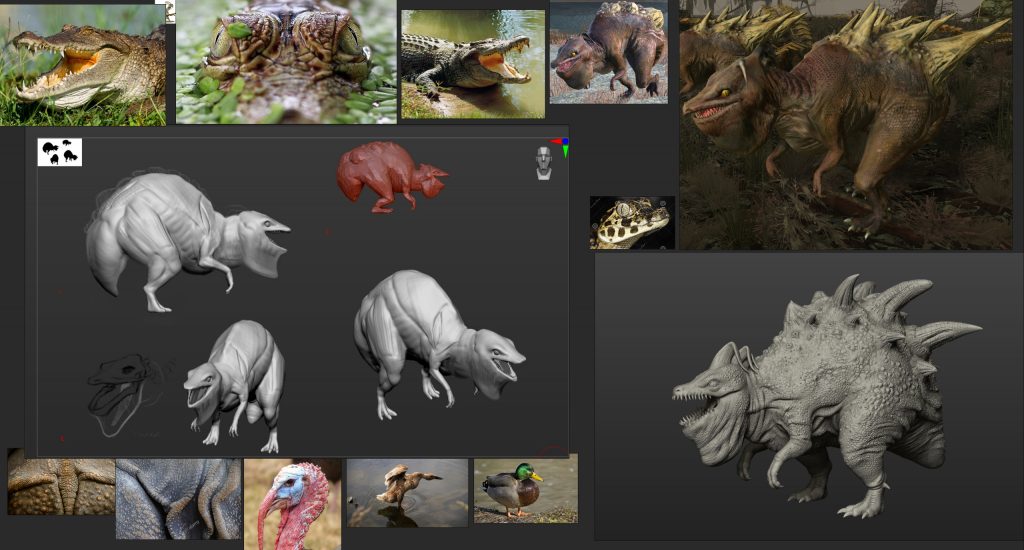 Raptors are omnivorous and are more like a vermin in Kenshi 1, so the idea was not to make it a ferocious predator but a clumsy, fat creature that’s not naturally aggressive but can fend for itself when need be. We’ll be incorporating two variants of the model into Kenshi 2: one with and one without spikes.”

Over the past few months programmers Sam Gynn and Craig Tinney have been hard at work on The Forgotten Construction Set (FCS), making changes that will have an impact on both Kenshi 1 and Kenshi 2.

For the uninitiated, the FCS is currently available to Kenshi 1 modders and is the exact same tool we use to edit the game.

This week we’re releasing an update to Kenshi 1’s FCS that brings in a huge amount of these changes (this will first appear in Steam’s experimental build). We caught up to have a little chat about the update:

Dan: First of all, can you both give me a bit of information about what you do at Lo-Fi?

Craig: I’m Craig, I do programming, push buttons and occupy space. Sam and I are responsible for developing new features on Kenshi 2 and the Forgotten Construction Set application, which our writers use to write all the narrative for our games and much more.

Sam: I’ve been working at Lo-Fi for a long while. I’m a Senior Programmer: I press buttons, make bugs and try to fix them again!

Dan: So the lovely bonus of you working on the Kenshi 2 FCS is that we can incorporate some of these changes into the Kenshi 1 FCS. Can you tell us a bit more about that?

Craig: So there’s two elements: quality of life stuff that our artists and writers ask for, usually improving the usability of the tool, all stuff that can be easily brought over to the Kenshi 1 FCS. And then there’s things which we have to make code changes for that go straight into Kenshi 2, which can’t be hammered back into the first game for boring technical reasons.

The update that’s coming out this week will be a load of bug fixes and quality of life updates that we’ve been sat on for a little while.

Dan: What are the highlights in this update?

Sam: The biggest one is the ability to simultaneously copy duplicate dialogue objects, which hasn’t previously been possible due to how dialogue is actually many objects rather than being one.

Craig: My favourite is probably the layout saving, which you did Sam; you can have a million windows open for editing and have them open back up again once you close the application. And it’s different for every mod, for example, you open up my [insert secret Kenshi 2 feature here] mod, and it’s got all the relevant objects open, whereas if I was to open the dialogue mod, I’d have all the dialogue packages and conversations open up that I was last editing, like dialogue stuff etc. which  It saves a

lot of clicking around and makes things much easier.

Dan: Do you have any expectations for what modders are going to do with the Kenshi 2 FCS?

Craig: Every feature is designed with the FCS in mind, and right now we’re working on a lot of features we can’t yet talk about, which are what I’m largely thinking about when imagining what modders will do. We are going to

great lengths to make sure people can do whatever wacky stuff that they want, and our game (hopefully) won’t break as a result of that.

Trust me, the new features are really cool, it’ll be amazing to see what people do with them.

Dan: Is it safe to say Kenshi 2 will be friendlier to modders than Kenshi 1?

Dan: Will the point of entry be similar in terms of knowledge for modders? Is there anything extra people are going to need to know for modding Kenshi 2?

Sam: It should be about the same; it’s the same tool, so any knowledge people have picked up while making mods for the original game will be relevant, but with lots of fun new features to play with.

Craig: You should be able to identify things you might like to change in the game and edit them within a couple of minutes. It’s the same kind of data relationships, a very small amount of that has changed.

Dan: So has the engine change not caused any issues with the FCS?

Sam: The assets we use have changed; we previously used ogre.mesh files, which I had to write an export tool for Blender for people to actually use, but that doesn’t work with Unreal, so we’re now using Unreal.asset files. But that is just the assets, the actual underlying data, such as lists of items, descriptions and all that stuff, that is just raw data that can just be read directly out of the files we use for the FCS, so it doesn’t matter which engine we’re using.

Dan: Will people that have some experience with Unreal be able to put it to use with Kenshi 2?

Craig: There has been some talk of modding blueprints

Sam: We hope so. Creating buildings will require some knowledge of the Unreal Blueprint editor, as that’s where they’re created now, rather than how that previously worked where you’d be working entirely in the FCS.  When creating buildings, working with doors and multiple floors will be much easier and more visual than it was before with Unreal Editor.

Craig: We’ll be making the same how-to documents available to modders that we give to artists, just with slightly plainer English so they can make better sense of them.

Dan: Awesome! Well, to wrap things up, do you have any favourite Kensh 1i mods?

Craig: Yeah, the one I made to extend the spider attack range, as I don’t think it’s long enough.

Sam: I tend not to use many mods. Though I do like the one that turns off the map marker, so I can properly feel lost.

Craig: That is a good one. Actually, the one we were talking about the other week that makes it so that when someone’s arm’s cut off it says “LMAO, Kenshi vibes”. I really liked that one.

Sam: There are lots of amazing mods, it’s great to scroll through and see what crazy things people have come up with.

Craig: I’m also partial to “Hippety hoppity, you are now my property”.

Life at Lo-Fi and beyond 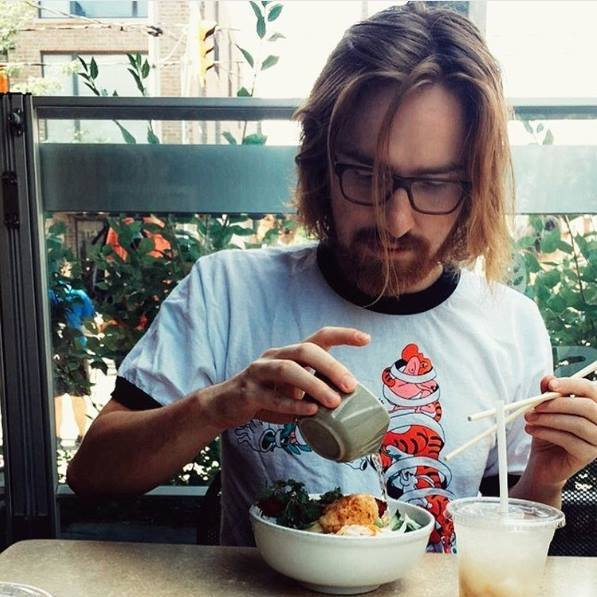 Hi! I’m Colton! I’ve been a writer at Lo-Fi for a few months now and wow, I’m happy to confirm that the people behind Kenshi are as smart and wonderful as you’d expect them to be. Currently I’m working on the finishing bits of Kenshi 2’s first big faction and a giiiiant migration of our internal wiki to a cool new platform. Ooh, and we recently added some context to a controversial mystery from K1. I think people will enjoy the direction we’ve taken.

I’m coming in as a big Kenshi fan already, so being able to add to such a wonderfully crafted world is a real dream. It’s also nice to know what Kenshi 2 is going to be about. If you’re worried that more writers = more things to read and obscure knowledge to wonder about, worry not! So much of our effort is spent coming up with very, uh, “Kenshi” scenarios and creating experiences for you to build your stories around. The lore is still there, obv, and it’s very good, but Kenshi is a sandbox game with a rich world to immerse yourself in. My job is to add flavour to the broth, with the occasional spicy tofu thrown in.

A bit about me! Aside from writing, most of my creative juice goes into making small games with my friends at Bad Pet. Devil Express is our most recent project and I love it a lot. If you want a sample of my writing style that’d be the best place to look hehehe. The pandemic has killed most of my non-playing video game hobbies (drinking with friends), but I still make time for the important things (drinking with friends on Discord). I was exercising for a month, that was nice. Now I just play Satisfactory and order take-out with my partner. 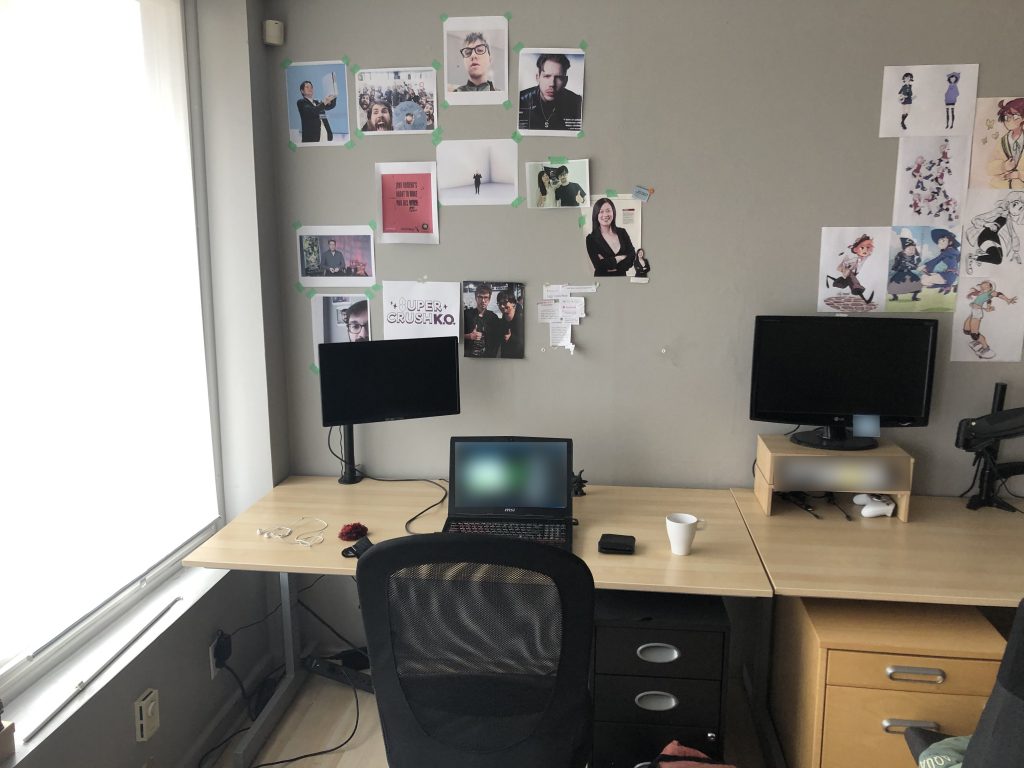 I’m one of the few non-Bristol based staffers, currently working out of this wonderful coworking space in Toronto, Canada with my friends at Laundry Bear and Reptoid Games. 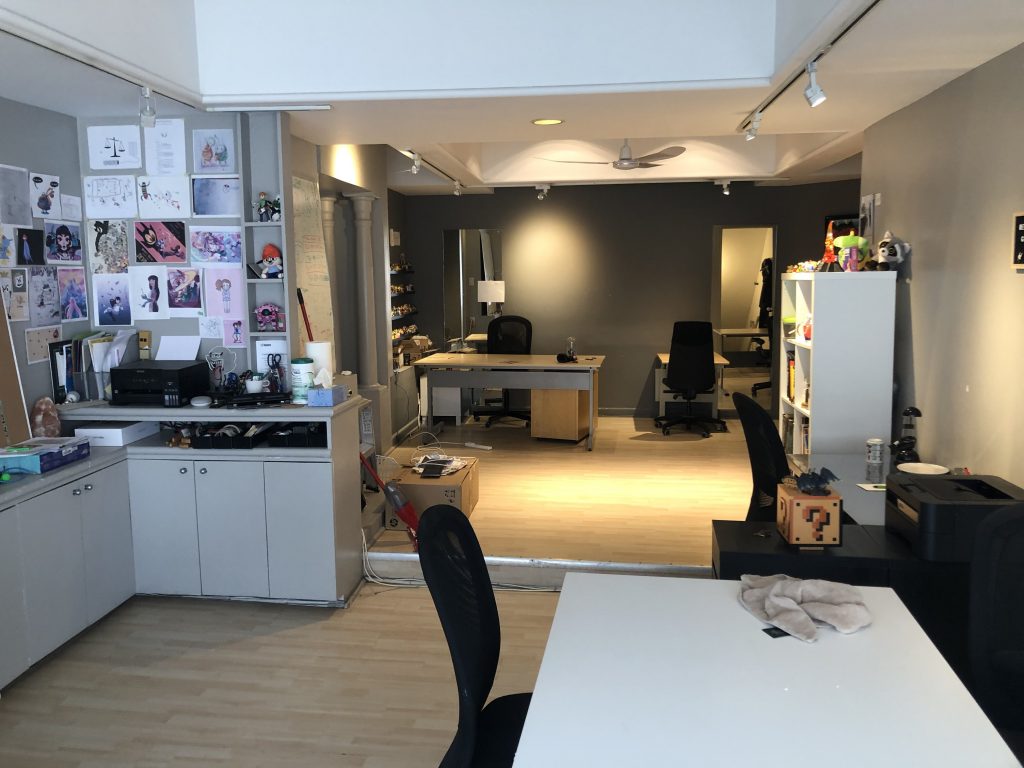 Most people are working from home so it’s pretty quiet. I am counting the days until we can all work together and make jokes. There’s a Korean corn dog place (K Seoul Hot Dog) that I go to for lunch! It is the light of my life. Here’s a picture: 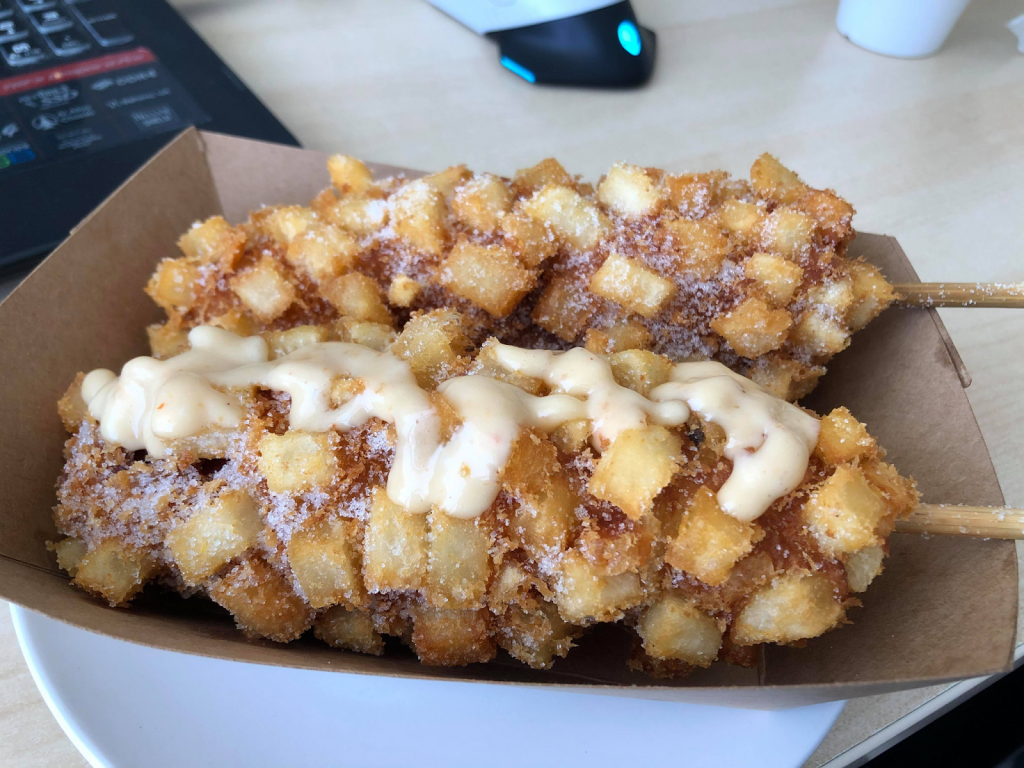 Okay, that’s all from me! Looking forward to sharing more of the very good things that are happening in Kenshi 2. 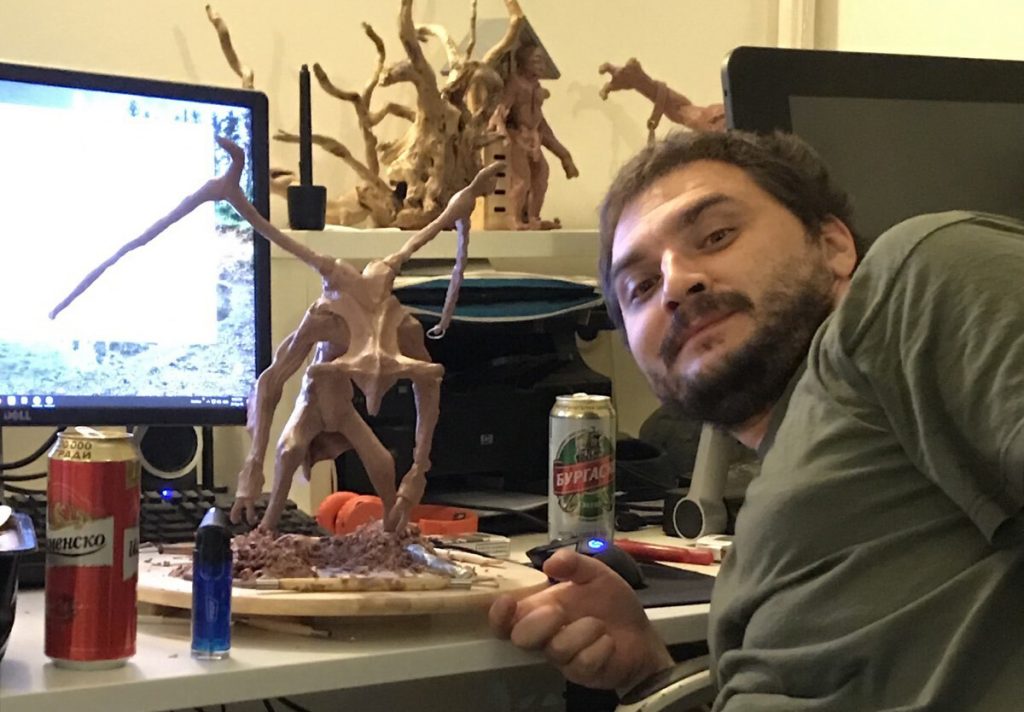 Hi, I’m Vitali, and this is my third year working for Lo-Fi. I’m currently creating characters, creatures and armour for Kenshi 2.

I have many hobbies but I’m not committed to any of them, or maybe the only consistent hobby I have is playing video games. I played Kenshi a lot and it was the motivation to join the team so I can work on a game that I actually like and will play. I prefer indie games because they have a soul and are not bound by stupid rules invented by people that never played a game in their life. 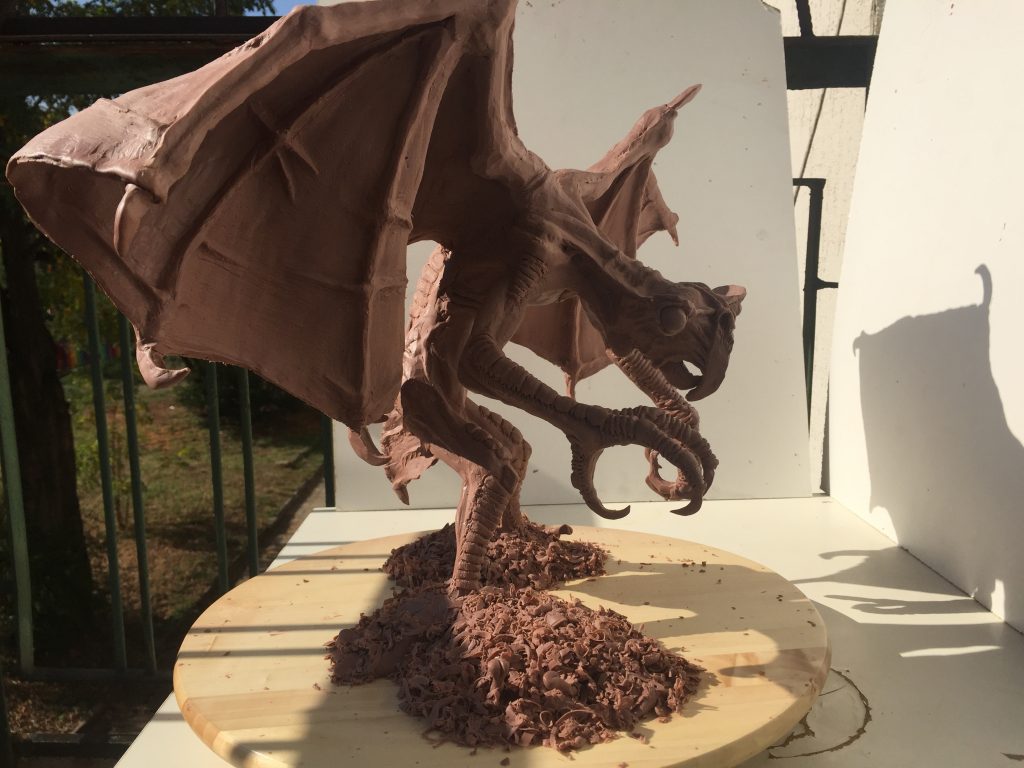 I also have pets… right now I have a dog, cat, two rats and a hermit crab, at some point we had a rabbit, chameleon and a turtle (not at the same time :D) So although I’m home alone during my working hours it still feels crowded. 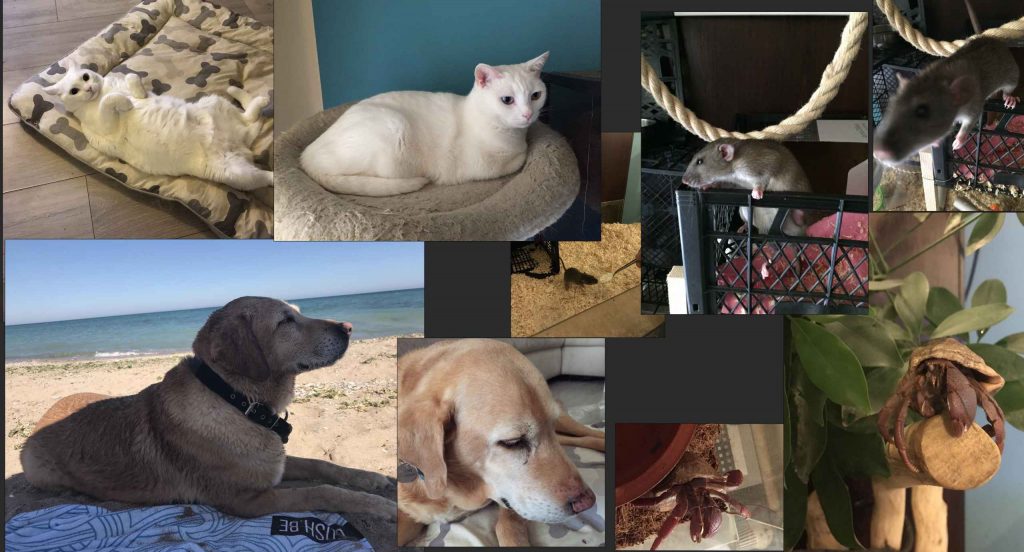 I used to do hang-gliding but I fell and gave up before I got any good, I tried riding a motorcycle but I crashed before I learned to drive properly… most of my outside PC hobbies are like that 😀