Hi everyone, welcome to our next community update. Sorry it’s been a while but it’s pretty difficult to put these together without spoiling juicy details to you. Relax (enjoy death), though, because we will be releasing another update much, much quicker than usual after this one to help satiate your cravings for more Kenshi 2 #content.

Things are good with the Lo-Fi team; we’re making excellent progress, sharpening our tools and constantly evolving our processes. That sounds like corporate nonsense we know, but the detail would bore you and basically it means we’re getting Kenshi 2 made at a good rate. We are fully on schedule, and even ahead of schedule in some areas, we’re just not telling you what that schedule is just yet.

So a few of you have been asking for merch and we are pleased to announce that we’ve partnered with the awesome folks at RobaRoba. They’re a spin-off of the excellent Indiebox, so they’re highly experienced with distribution and production.

We’re launching with a total of six different shirts for you to get your hands on. They’re going to be available in a range of sizes and will ship to a wide range of countries. For now, we’re only stocking the shirts in black but we will soon be adding some more colours, more fits and variations, and more merch in general.

Check out our official Kenshi shirts! 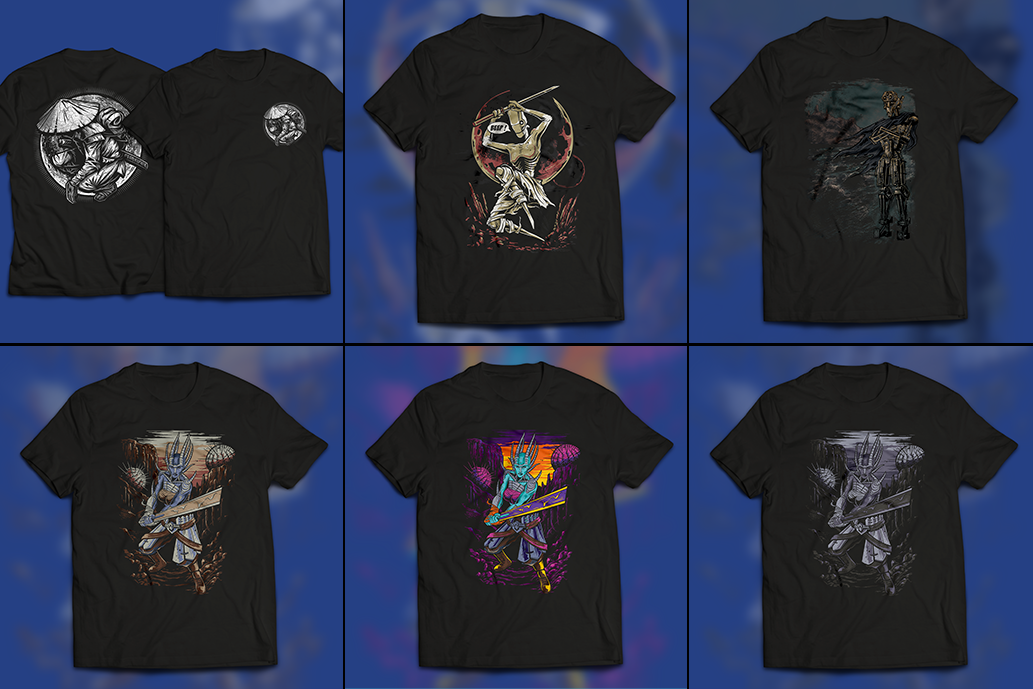 We also have some beautiful die cut stickers to get your hands on! They should be available on the RobaRoba launch but if you don’t see them just yet, they’ll be up there very soon.

This week we’re going to take a little look at the design behind the beloved Hivers, which we have some big plans for in Kenshi 2. We’ll let our 3D Artist Vitali lead you in…

Vitali: “As our fans will know, in the first game, we had different Hive sub-races but they all were using the same model, and only had color variation in terms of textures. We decided to change things up with Kenshi 2 and give them the love they deserve by making a new unique design for all additional sub-races (the exact variations will remain a secret for now). As for the Western Hive we decided to keep it as close as possible to the original”

Christopher (Concept Artist): “The Hiver is beloved by fans, and a really interesting design. I remember being filled with wonder at my first encounter with one of those stick-legged creatures, wandering alone through the desert. So working on the Hiver for Kenshi 2, a main point was to not implement changes that are too drastic and would change its visual identity. 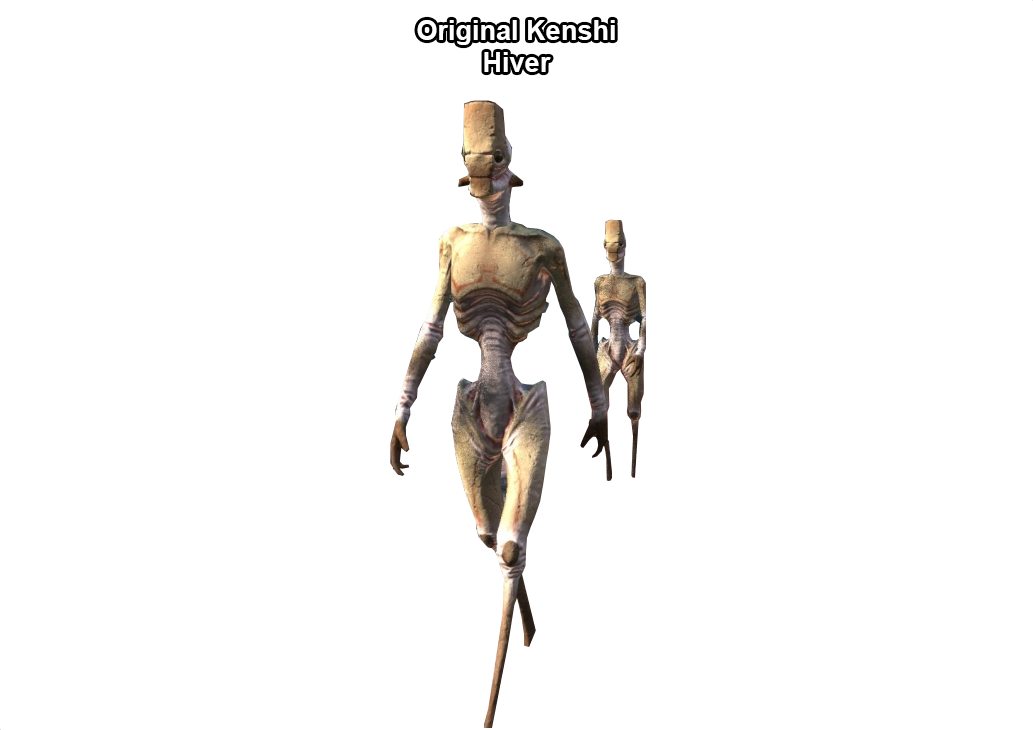 Our 3D Artist Vitali started out with the main body of work, modelling the Hiver while refining the design. After that I made some over-paints to try different suggestions we came up with and see if they would improve the design further.

For example: We tried implementing the softer wrinkled skin from the elbows, at the shoulder as well. The Idea was to create further visual distinction between drone-types, other than the head. 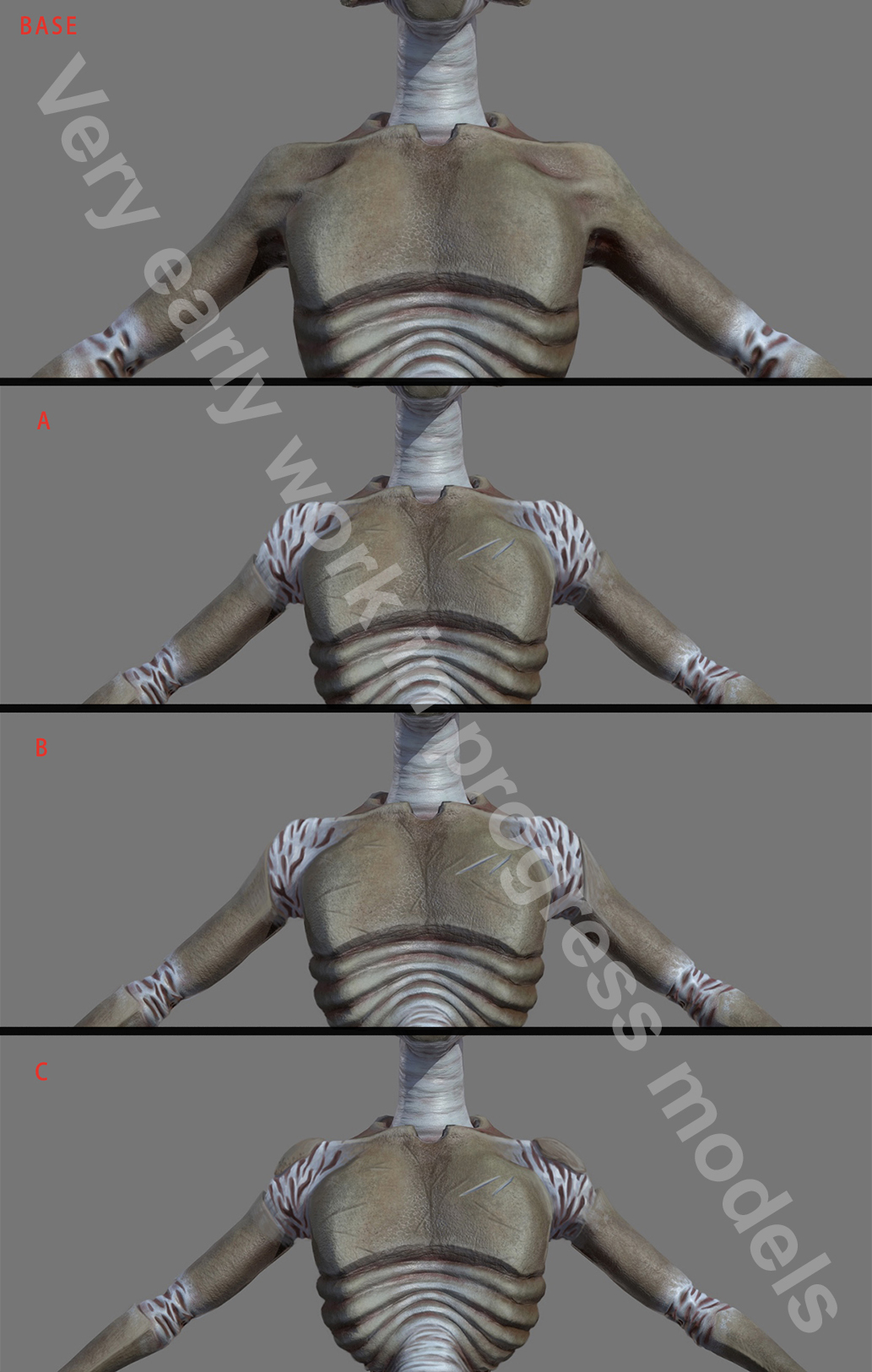 Another thing we tried was changing the look of the horns. The idea here was to strengthen the appearance of them and underline the fact that soldier drones would be able to utilise their horns in combat as well as in social disputes. We decided to keep the original appearance of the horns, but will keep the possibility of more length variations via morphs within the character editor.

In the end we decided for some adjustments and discarded others. The result after Vitali worked his magic can be seen here. The final version turned out beautifully.” 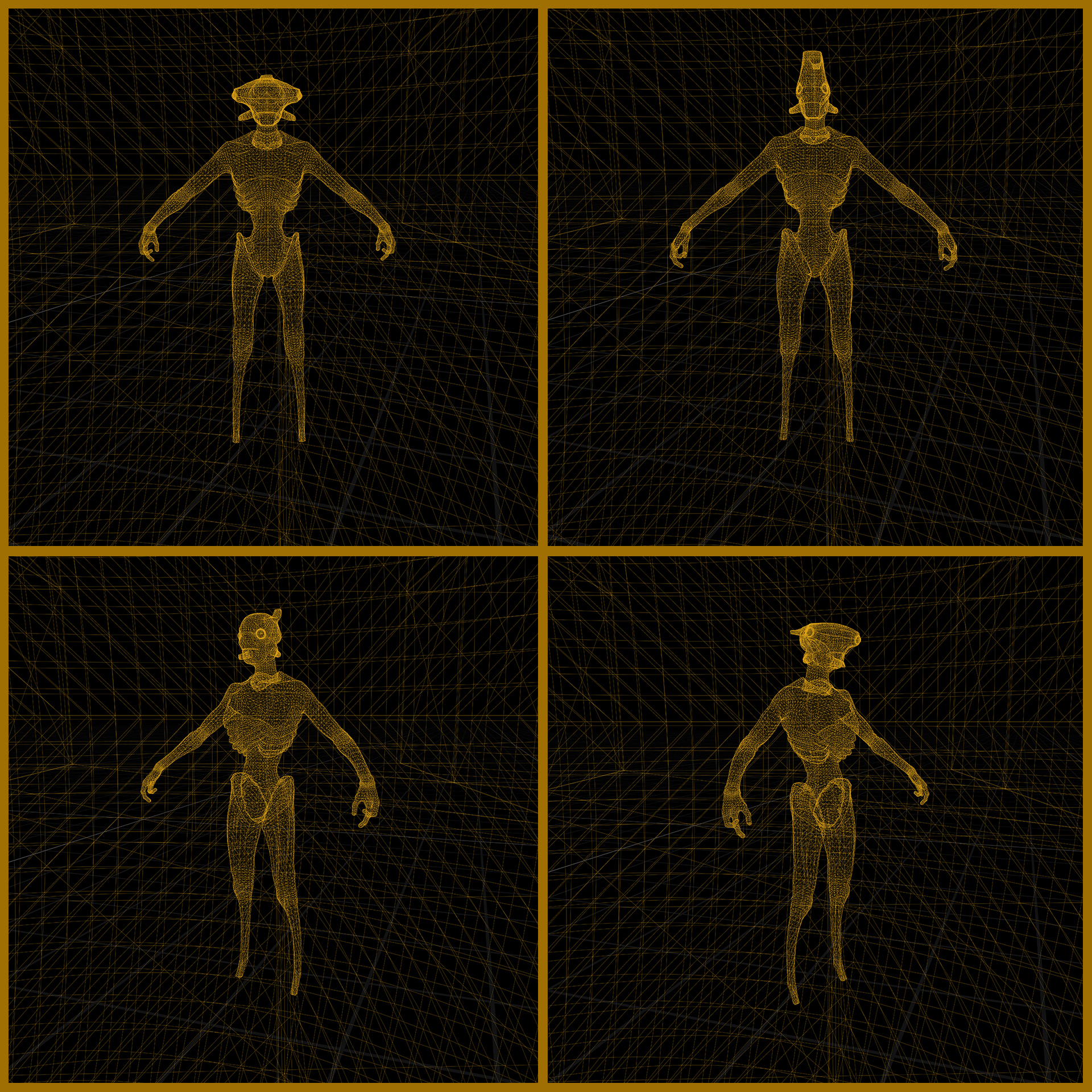 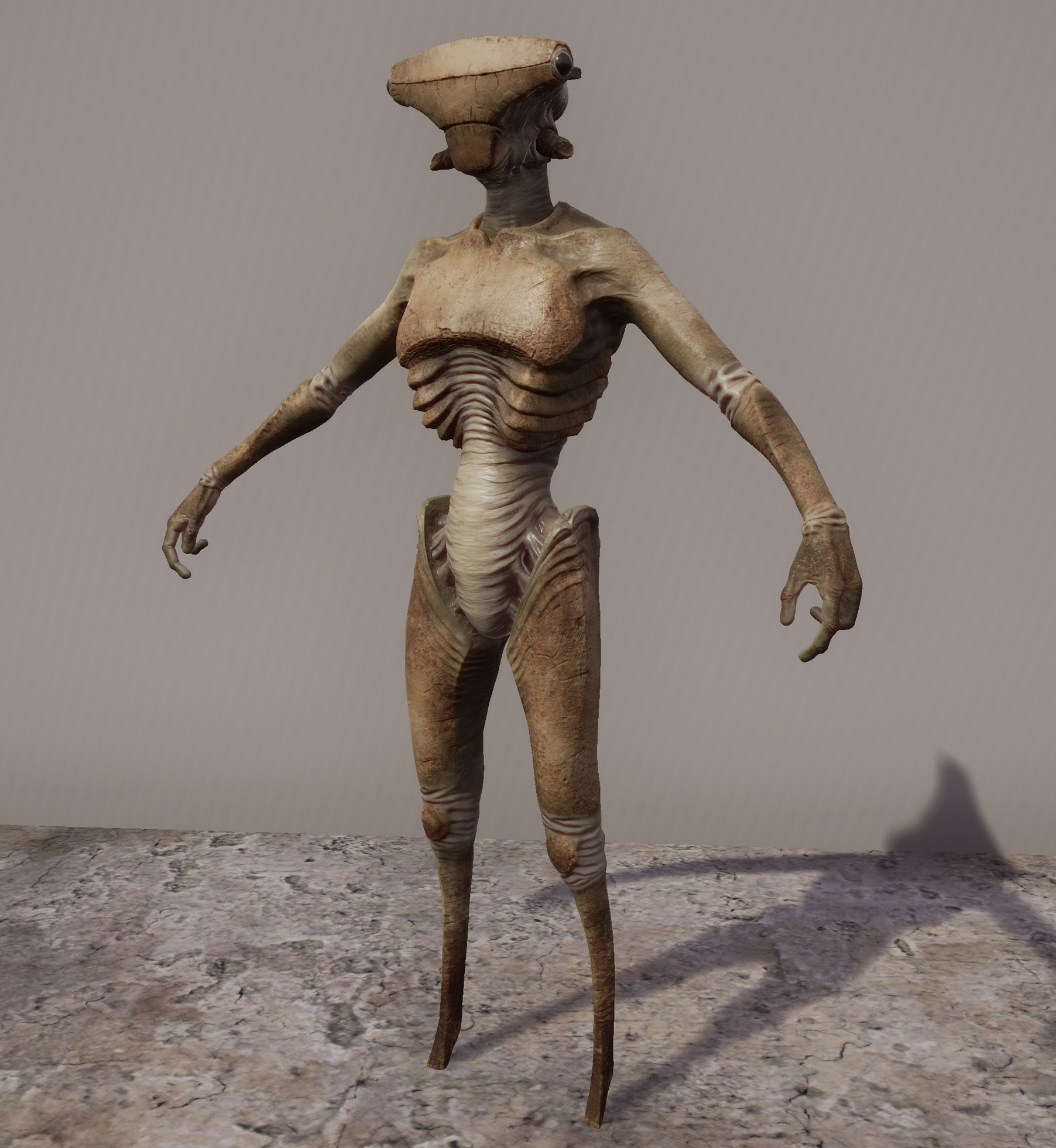 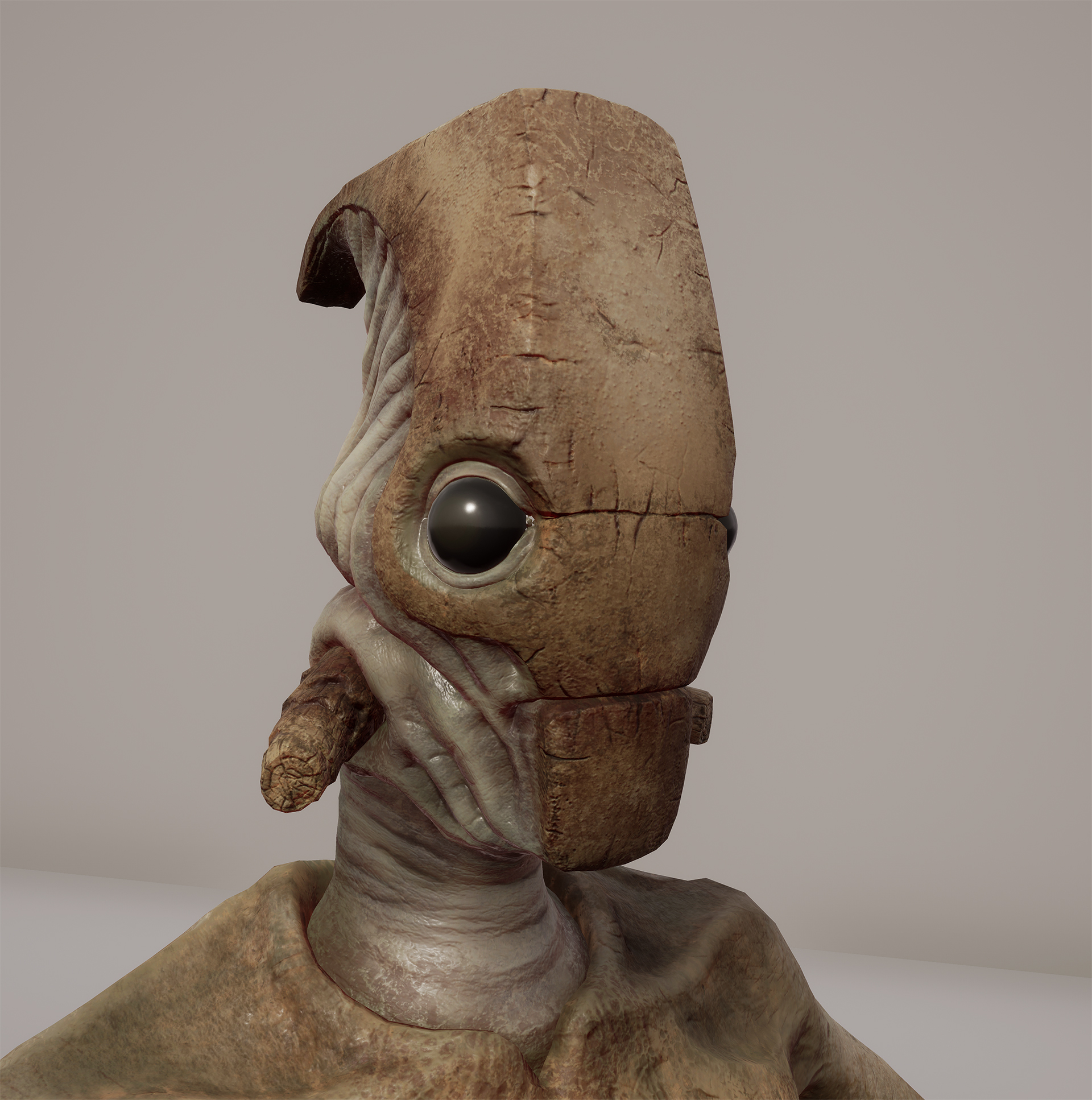